NOTE: This is a rough translation of the german article I wrote together with fellow Ubuntu Insider Sujeevan Vijayakumaran.

After showing off some pictures of a Meizu MX4 running Ubuntu in 2014, Meizu and Canonical finally signed a cooperation agreement on November 25, 2014. Six months later the MX4 Ubuntu Edition became available on the chinese market, although in small quantities and apparently only for developers. While european customers still have to wait – until the fourth week of june, according to our sources – Ubuntu Insider group members got a preview edition of the device this week. 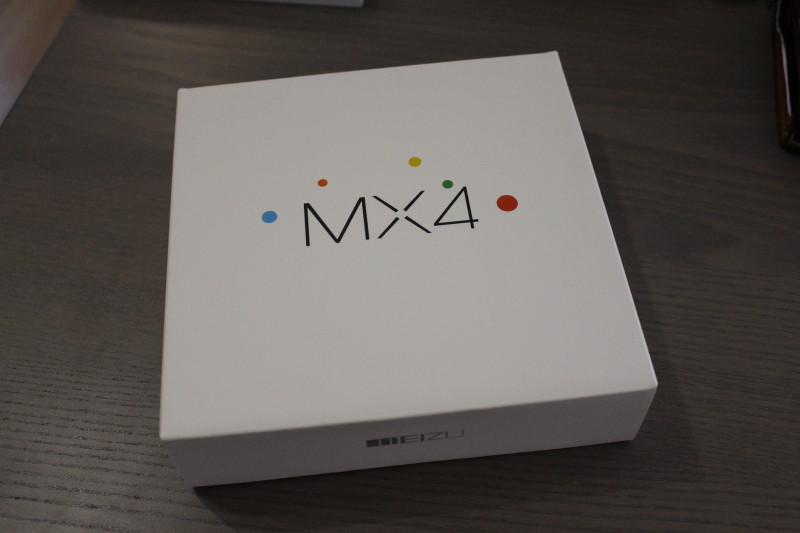 The device comes in a simple, white box with an “MX4” logo printed on the front. My box contained the smartphone, a wall charger rated at 5 Volts/2 Ampere, and an USB cable. While there is a space in the box for in-ear headphones, it was sealed with a piece of paper with the message “Earphones not included” printed on.

The phone itself is wrapped in a second box which serves as a short introduction at the same time: on four pages the most important features of the phone, the display and the camera, are introduced. The last page oddly mentions “Flyme OS”, a home-grown Android fork by Meizu, as the operating system. We have already heard that chinese MX4 Ubuntu Edition customers also get their devices in a box which is intended for Flyme OS. It is unclear what the boxes for the european market will look like in the end.

Since I now own multiple devices, I can do a comparison between the Meizu MX4 (Ubuntu), bq Aquaris E4.5 (Ubuntu) and the Google/LG Nexus 5 (Android). Especially the comparison between the MX4 and the Nexus 5 should be interesting, because the former Google flagship aimed at the same customers as the MX4, and the hardware is comparable in many regards. 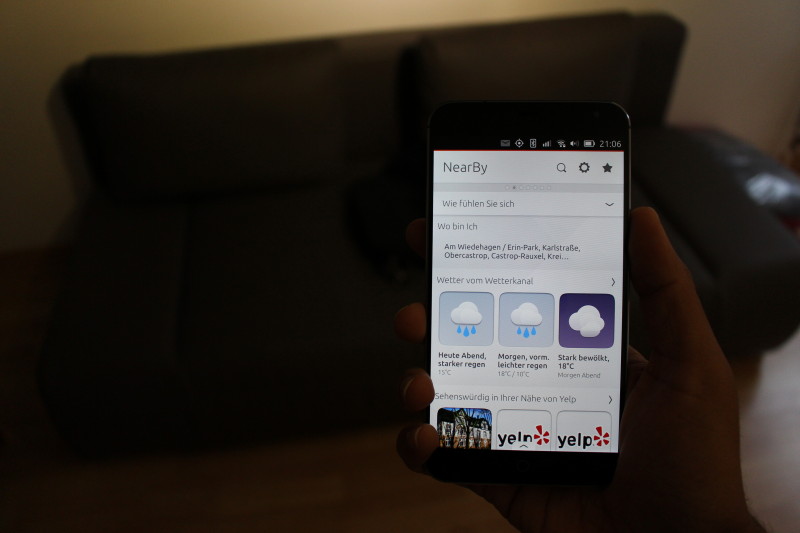 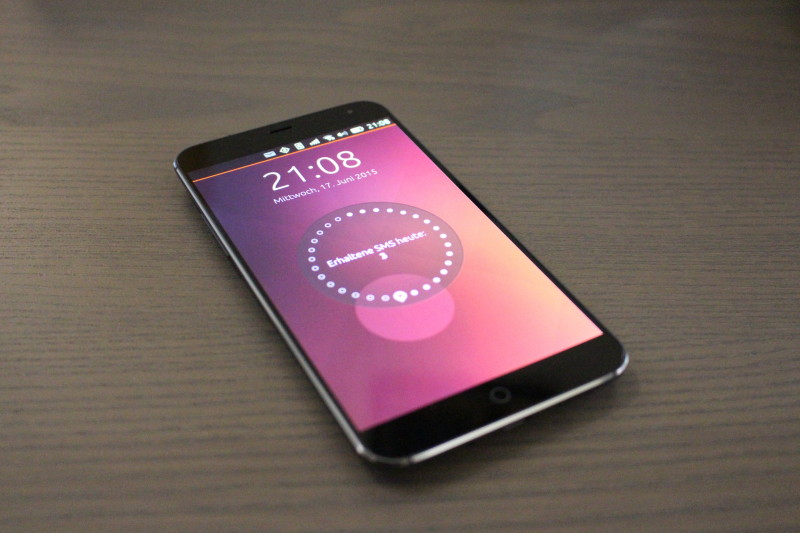 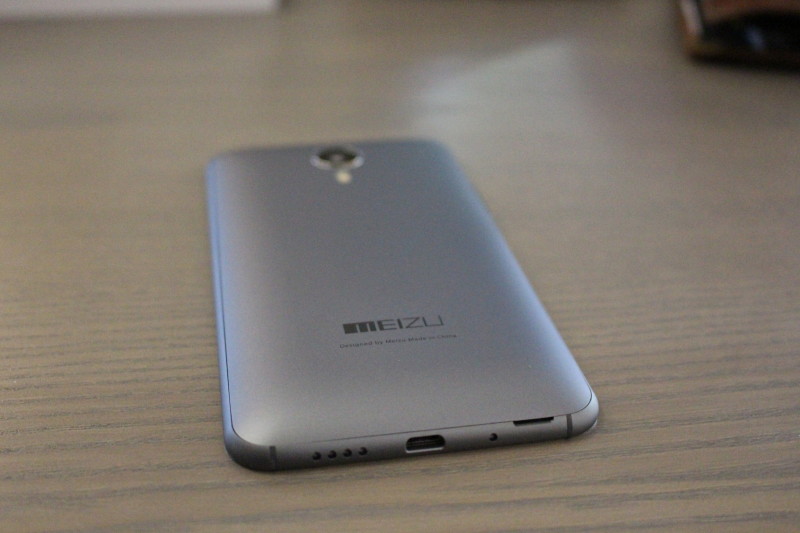 As you can see on the pictures, the MX4 has extremely rounded edges and thus appears smaller than it actually is with its 144 x 75.2 x 8.9 millimeters. The design makes the body look considerably thinner than the Aquaris E4.5, which it isn’t: at 8.9 millimeters (MX4) versus 9 millimeters (Aquaris E4.5) the difference is negligible.

Even though the MX4 is offered in white and gold colors within china, Ubuntu Insiders got the device in gray. We currently do not know which colors Meizu will offer on the european market. The usual online resellers will happily sell you back covers in any color you want, but the back cover does not cover the whole back of the device.

It is currently not possible to do a fair comparison between the three devices because there are no reliable benchmarks available for both Android and Ubuntu. Also a higher CPU performance doesn’t necessarily translate into a better user experience: both operating systems make extensive use of the GPU to accelerate their user interfaces.

It can be said that the MT6595 chipset used in the MX4 plays in a different league than the chipsets of the Aquaris E4.5 and the Nexus 5: Not only can it switch between four slow, but energy-efficient Cortex-A7 cores and four high-performance Cortex-A17 cores on demand, also the PowerVR GPU is a lot faster than the Mali-400 unit in the Aquaris E4.5. It has to be noted though that the MX4 display has more than four times as many pixels as the Aquaris E4.5, so the theoretical performance win might translate into a loss at the end because a much higher number of pixels has to be rendered.

While the MX4 is generally available with up to 64 GB of internal storage, the Ubuntu Edition models are currently only shipped with 16 GB. Ubuntu reserves about 4 GB for itself, so the user ends up with 12 GB of usable storage and not SD card slot. This is definitely not enough for me, I bought the 32 GB Nexus 5 model and regularly have to remove stuff because my music library, pictures, offline navigation maps etc. fill up the storage.

It also leads to the following, a bit bizarre situation: I was able to upgrade the “low-end” Aquaris E4.5 to a total of 72 GB with a medium-priced 64 GB microSD card, but the “high-end” MX4 offers no such possibility.

The MX4 feels huge in comparison to the other phones, even though the display is just 0.4” larger than the Nexus 5. At maximum brightness all three devices are about equal, but there seem to be different ideas of what a plain, white are should look like: the Aquaris E4.5 display has a blue tint, the MX4 looks a bit yellow. I don’t know if all shipped devices of the same model expose these color differences.

Meizu’s marketing strategy has been focusing on the upper-class camera built into the MX4 for a while. Social media is full with “professional-grade” pictures sent in by MX4 users. 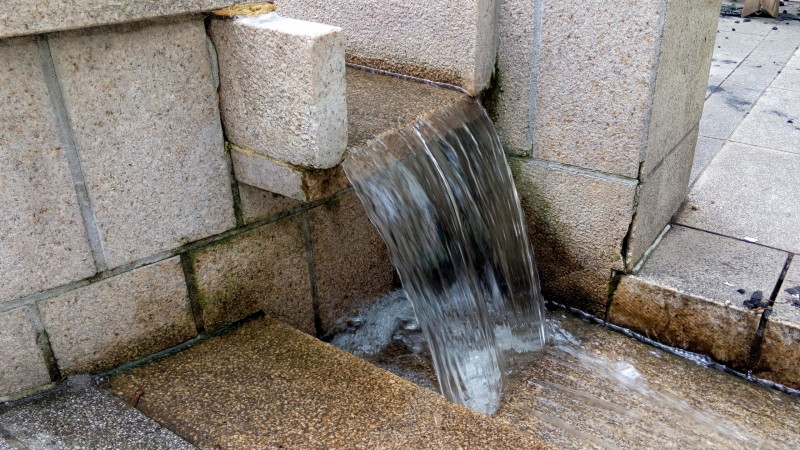 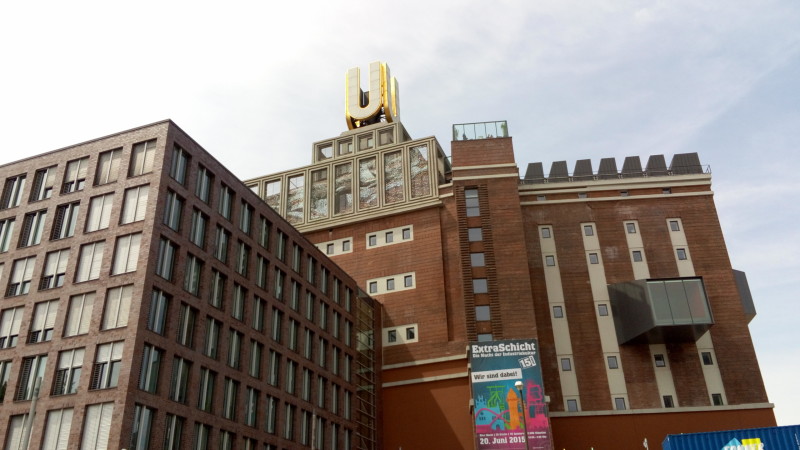 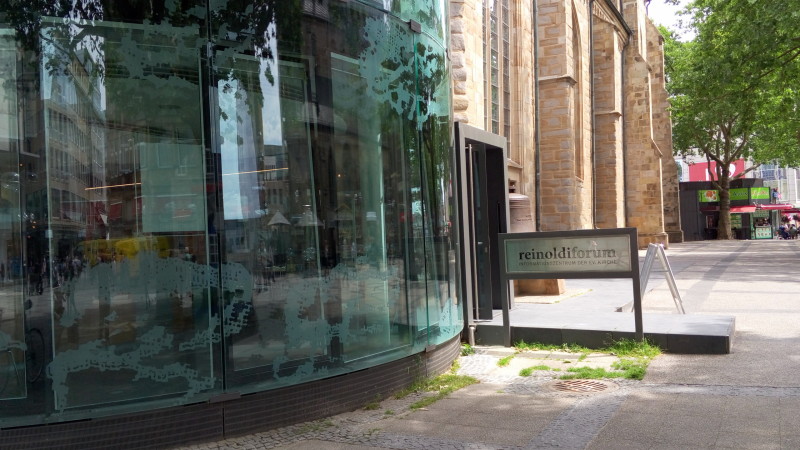 The quality is much higher than that of the Aquaris E4.5 and the Nexus 5.

People kept asking why the Aquaris E4.5 doesn’t come with a 4G/LTE radio, so the MX4 supports LTE Cat 4 at up to 150 MBit/s downstream and up to 50 MBit/s upstream. I tested the device in the joint 4G network of german providers O2 and e-Plus, and it worked out of the box. During a short speedtest the phone easily hit 80 MBit/s.

In contrast to the Aquaris E4.5 and the Nexus 5, the body of the MX4 isn’t fully closed. So you don’t put your SIM card(s) into a small sleigh and slide it into the side of the device, you remove the back cover and put the SIM into a small, microSD-card like slot.

Because of the larger volume of the phone, Meizu was able to choose a 3100 mAh battery. This is 50 percent more than both the Aquaris E4.5 and the Nexus 5, but a high-performance device with such a high-resolution display will most likely also consume more energy, so it is yet unclear if the larger battery capacity will translate into a much higher standby time.

There are a power button at the top of the device and volume controls on the left side, but there is also a “Home” button below the display. This actually violates the button-less design of Ubuntu, bq explicitely removed the existing Android buttons for the E4.5 Ubuntu Edition. The Home-button integrates the notification LED.

The earphone connector is located at the top, while the loudspeaker and the Micro-USB-2.0 port are at the bottom. The USB port supports USB-OTF and should also support MHL for external displays, but it is currently unclear if the MX4 actually supports MHL. Many users unsuccessfully tried to enable it.

The devices shipped to Ubuntu Insiders immediately offered an update to image version “r1”, which is based on Ubuntu 15.04, but is not identical with the OTA-4 update released for most other devices on June 15. This will be corrected with the next version, to be released at the end of July.

There is currently no difference to the operating system version shipped with the Aquaris E4.5. After completing the setup wizard comes an introduction to gestures, then the phone is usable. Localisation support and maps are provided by Nokia HERE, the list of pre-installed apps and scopes is identical to the Aquaris E4.5. This makes me think about which image the MX4 phones for the chinese market are currently using, because I would expect that they come pre-installed with some of the special chinese scopes from the store?