NOTE: This is a continuation of the series, but it does not rely on the previous articles. Thanks to Oliver Grawert for pointing out the bug report regarding the banner string.

NOTE: Most information in this article was reverse-engineered reading the original source code and using strace, tcpdump and WireShark. This is neither a reference nor complete.

UPDATE 15.05.2015: I decided that the serialno field in the CONNECT message cannot be optional.

So you want to become a power user and do something with your phone that is not (yet) possible, or you are an application developer who wants to test his app on the real device. Some of you may try to debug an issue at the core of the device, and a few – like me – want to completely hack the system. Great idea!

The only problem is that Ubuntu Touch devices, like the bq Aquaris E4.5 Ubuntu Edition, are locked down by default for security purposes. The only “standard” way to access the system core is the Terminal app. You don’t want to type all your commands in that tiny little window, and what about transfering system files or automating things? MTP only shares user data via USB, not the rest of the system files or directories. There is no SSH daemon running by default. How do you even install and test your new app on a phone?

Developer mode to the rescue!

Here’s how to enable Developer mode on current Ubuntu Touch images. Enter System Settings and click/tap on “About this phone”: 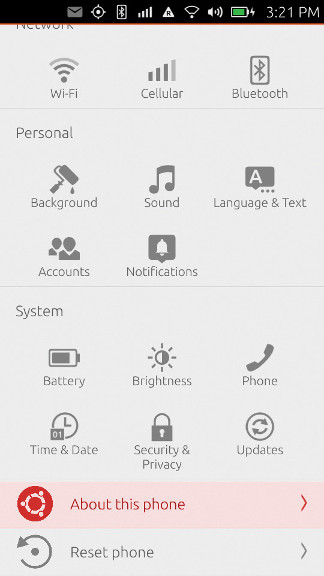 Click/Tap on “Developer mode” at the bottom: 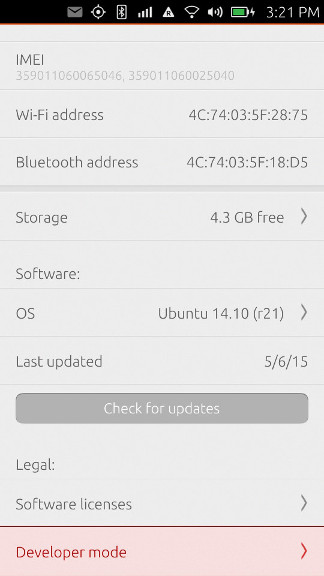 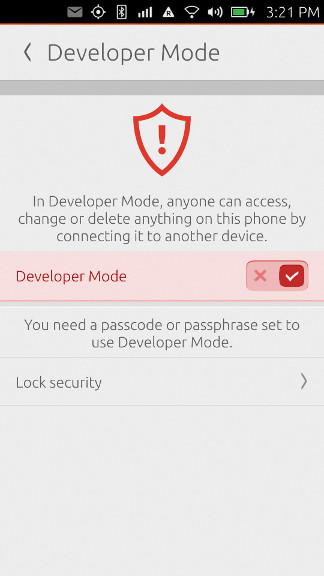 You may have to set a passcode or passphrase if you haven’t already. That’s it, Developer mode is now enabled.

Now what does that even mean? What changed exactly? The answer is short and simple: the device now runs an instance of the /usr/bin/adbd Daemon. Nothing more, nothing less, nothing else. If you already know about ADB, you can skip the rest of this article, but there might be a detail or two you didn’t know yet.

ADB stands for “Android Debug Bridge” and is the standard way to give developers external access to a device, usually via an USB cable. The system has three components and looks a bit complex at first:

Why doesn’t the Client talk directly to the Daemon?

The standard implementation for the Server and Client processes is the adb binary provided by the Android Open Source Project (AOSP). Actually the same binary implements both roles: when adb is executed and there is no Server running, it forks itself into the background with the command line adb -P 5037 fork-server server. And if you look at the AOSP source code, you will find out that the standard adbd Daemon and the adb Client/Server binaries share most of their codebase.

When the Server is forked, it scans for attached devices and running emulators and tests if they expose an ADB interface.

The Daemon and Server talk to each other in a message-based binary wire protocol which is documented here.

If something unexpected happens, like the reception of a garbled message, an unknown command or an unknown parameter, the connection is closed immediately. So you always know when you did something wrong.

There are currently six commands defined, all in the form COMMAND(arg0, arg1, payload), with the payload usually being a string.

CONNECT(version, maxdata, "system-identity-string") is used to tell a remote system that the sender speaks the ADB protocol and is ready. version specifies the maximum protocol version the sender understands, maxdata is the maximum message lenght it will accept, and the payload is supposed to be an identifier string in the format . The systemtype value is either “bootloader” if the sender is in the Bootloader menu, “device” if the sender has started the Daemon normally, or “host” if the sender is a Server. serialno is mandatory (it is used to identify the device if more than one is present), banner is optional and may contain additional device data, e.g. the banner value on a Nexus 4 is device::ro.product.name=occam;ro.product.model=Nexus 4;ro.product.device=mako. On the bq Aquaris E4.5 Ubuntu Edition it’s currently exactly the same value because of bug 1297927.

Both sides will send a CONNECT message to the other end when the underlying connection is first establised, e.g. when the USB cable is connected and both sides run their respecitve processes.

AUTH(type, 0, "data") is used to authenticate the connection with RSA signatures. I am not too good at cryptography and this step seems to be optional, so if you are interested, please check the original documentation.

OPEN(local-id, 0, "destination") informs the recipient that the sender wants to connect its local stream identified by local-id to the destination identified by the payload string. This sounds a bit complicated, so let’s look at the possible destinations:

READY(local-id, remote-id, "") is the answer to a successful OPEN command. local-id identifies the ID the sender has allocated for this stream, and remote-id is the local-id used in the OPEN command, so the initiator of the OPEN message knows which request is being acknowledged. Since every stream is now identified by an ID on each side, we can multiplex many streams between the two devices at the same time.

WRITE(0, remote-id, "data") sends a string of data to the remote side, intended for the stream identified by remote-id. Note that there is no READ command. The current implementation seems to also use READY messages to acknowlede every write, but it is not defined if the acknowledgement comes as soon as the write has been received or only after the action triggered by the write has been completed.

CLOSE(local-id, remote-id, "") closes the stream identified by local-id and remote-id. This is an unilateral action, both sides each have to send a CLOSE message for the same stream.

SYNC(online, sequence, "") is a purely internal message and never sent across the wire.

So what exactly happens on the wire when the Client e.g. tells the Server to open a shell and execute the ls command on the device using the Daemon? Let’s assume the connection has to be fully established for completeness.

The Client side protocol

As mentioned in the introduction, the Client and the Server use a different protocol to talk to each other. This protocol is called “smart sockets”. It is ASCII-based and works in two modes:

In “setup mode” the following commands are interpreted:

A Client side protocol example

The following Ruby code (inspired by Tetsuyuki Kobayashi) will execute shell:ls on the only attached device and return its output:

This produces the following message flow:

Luckily you don’t ever have to care about these two protocols because there is a client binary which has parameters for most functionality. The following part lists the most important ones. Some commands directly map to a Client protocol command, others have been implemented via the shell destination.

The -s parameter must be used to specify the serial number of the intended device when more than one is present.

Start or kill the local ADB server (the client will automatically try to start one if it doesn’t find one):

Block until a device comes online:

Get the state of the device:

Get the serial number of the device:

Continuously print the status of the device:

Copy a local file or directory to the device:

Copy a file or directory from the device:

Copy a file or directory from the host, but only if the source is more recent than the target:

Execute a command using the remote shell and exit after it has finished:

If you know better and/or something has changed, please find me on Launchpad.net and do get in contact!