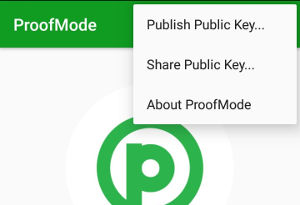 On February 24, 2017 The Guardian Project (not to be confused with the newspaper) presented “Proof Mode”, an app for Android smartphones which promises to add cryptographic “proof” to ever image and video file recorded by the device as to prove the material is authentic and hasn’t been tampered with. Sadly, none of the promises have proven to be true to me.

When I read the announcement for the first time, I was already quite sceptic because of the quite bold claims:

Creating proof for something is not easy, after all, especially when the data source is a personal device which can easily be exposed to huge amounts of tampering. Creating a proof hard enough to be treated as “evidence” is incredibly hard in many jurisdictions. But let me summarise what this app wants to accomplish first:

Before I try to come up with all the reasons why I don’t think this is possible, let us have a look at how the app is supposed to work.

How it’s supposed to work

When you run Proof Mode for the first time, it generates a PGP key pair in the background. The user interface is very simple: 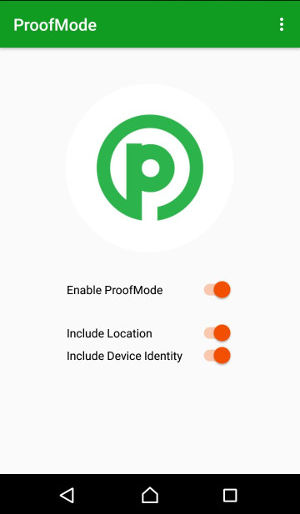 When you enable the “Enable ProofMode” switch, a background service is started and automatically signs all media (pictures and video) recorded with the built-in camera(s). There is no need to enter passwords or manually encrypt or ign anything, everything happens automatically in the background. Before you record anything, you should probably send your private key to your friends and the media though, so they can verify your proofs later. This can be accomplished using the menu:

This will open the default Android “Share” overlay and let you send the public key to other people, e.g. using e-mail, instant messengers and such. Your friends would then import your public key into their key rings, for example using GnuPG:

Now you go and record some incriminating footage using any standard camera app. When you want to prove authenticity to someone, you just go to the Gallery, navigate to the content in question, press the “Share” icon, select “Share Proof”, and Proof Mode pops up, offering three options: 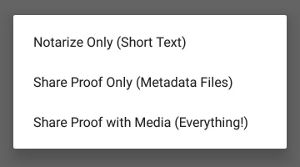 This isn’t a proof in itself, it just states that a file called IMG_20170307_143742.jpg with the given SHA-256 hash was signed at the current time by the given key. According to the original CameraV app documentation, “This provides a way to timestamp the media with a third-party, and ensure that any tampering or modification of the media can be later detected”.

“Share Proof” has two sub-options, the only difference being that one only shares the metadata and signature, while the other also shares the original media file. In my case I’m going to share everything and send it to myself via Telegram, and this is what I end up with: 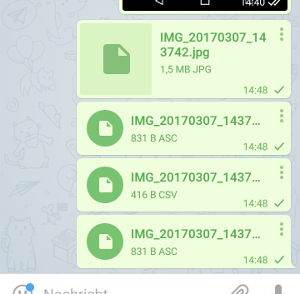 The first file is the original picture I took earlier, the IMG_20170307_143742.jpg.proof.csv file contains metadata and additional sensor data gathered from the phone to make the proof more robust. Here’s an example for my file:

To sum it up, this file contains:

The additional two files with the .asc suffix are the PGP signature files. Let’s check my signatures:

Why it can’t work

I get the general idea, but Proof Mode only seems to think about three involved parties:

But this leaves out the following attack vectors:

The problem with proving something is that there has to be a full chain of trust from the beginning to the end. This is incredibly hard to do. You basically need the whole device to be a certified, tamper-proof box, and this is how professional systems are built. Police Body cameras for example are black boxes, you can only turn them on or off and download the data, but nothing else, and many do implement additional hardware security measures to prevent and detect tampering. High-End Nikon and Canon cameras also offer image authentication mechanisms built right into the hardware to detect manipulation. Many publishing companies now require photographers to follow strict guidelines after some major hoaxes slipped through, but even the Nikon Image Authentication System has its flaws.

Proof Mode doesn’t prove anything. All data sources, from the camera picture to the location data, can easily be faked. You sign your own data. No third party every gets to see the data, the only person vouching for its authenticity is yourself. If Proof Mode made it possible to easily generate a proof for fake data, then all trust in the system would vanish. And Proof Mode offers plenty of ways to generate fake proofs.

Attack 1: The app signs everything

The Proof Mode app doesn’t records pictures and videos by itself, it just signs other applications’ data. Looking through the code I noticed that it doesn’t even react on an actual camera event (Android has ACTION_IMAGE_CAPTURE for this), but just watches for changes in the standard camera data folders (the DCIM folder both on internal and external media) every ten seconds and signs everything that looks like an image or video file.

So I just connected the phone to my laptop via an USB cable, copied this Chuck Norris fact into the DCIM folder and a couple of seconds later I had a “proof” for it. 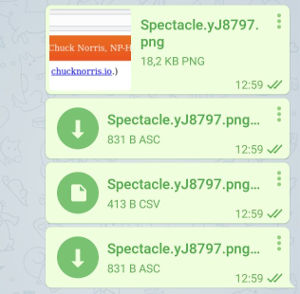 Proof Mode just created a proof that this picture was recorded right now on this device at the current location. In reality it was screen-captured days ago somewhere else. A malevolent activist can thus easily pretend a manipulated picture was taken at their current time and location. Or an attacker can get a hold of the device, put manipulated files on it and send proofs to other people (there’s no password for the private key, remember?), questioning the credibility of the activist and the whole system later. The EXIF data in the picture just has to match the metadata in the CSV file, that’s all.

You can easily extract the private PGP key from the device, either if the device has been rooted (which is a common thing to do) or using one of the many tools available to law enforcement. Maybe the activist had to install a special Android ROM or root the device to be able to use a VPN and circumvent government censorship, so having a modified device is not uncommon by any means. You can then just import the PGP key into your favourite command line tool and create all the proofs you want.

Oh, the private key the app generates actually has a password. But it’s hardcoded:

Attack 3: You don’t even need the app

If you’ve had a close look at the verification step at the beginning of this post, you might have noticed that the public key is just a random 4096 bit key and the user ID is always set to “noone@proofmode.witness.org”:

You might suspect where this is going to. Just take your favourite PGP application, create a key with identical properties and fake all the proofs you want. If someone comes later and wants the keys and the device to check the proof, just say it was taken from you at a police control when you left the area. Losing the device was on my list of expected attack vectors, right?

Can it be fixed?

In my opinion: No. There’s just no way a smartphone with an open operating system could ever be used for the creation of reliable proofs if the person creating the footage, the device owner, the holder of the keys and the one vouching for the security of the device are all the same person.